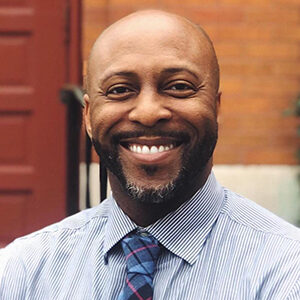 Corey Taylor graduated with a BS in Physiological Science from UCLA and a Masters in Education and Administrative Credential from National University in Los Angeles. He began his career as an educator in the Inglewood Unified School District, in Inglewood, CA, where he was a middle school science teacher and MESA (Math, Engineering and Science Achievement) Advisor. Following his ten years of service, Corey began working in the charter school world for Bright Star Schools in Los Angeles, CA. He would spend two years as a middle school science teacher before transitioning into the role of Assistant Principal and later Principal of Bright Star Secondary Charter Academy, where he actively served underrepresented students in the Los Angeles area. After his move to Richmond with his wife, a fellow educator, and 3 young children, Corey is excited to be at Cristo Rey and meet the first class of students in 2019!